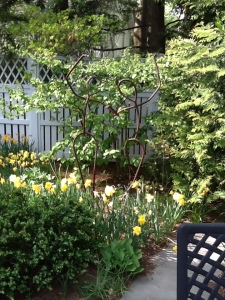 snow from the streets.

as I opened my front door,

a hint of flutter.

In my guide book

Then in the park,

sitting with my sister,

waiting for a traffic light to change,

During Spring and Summer

there are many more.

Later in the Fall,

on a warm day.

I am not startled

A menu stained with a ring of brown gravy had a scrabbled, scattered list of names-Terrence Griffin, 1853 Bray ,. Elizabeth Doyle, Roundwood. She was told many times by her grandmother, her father and her cousin on her mother’s side that her ancestry was Irish.

Learning to dance the Irish jig, copying the unique interlacing designs from the colorful Book of Kells, and enjoying the favorite and traditional Irish melodies, reinforced her sense of identity as being an Irish American as she grew up.

It wasn’t until she had grandchildren of her own that she looked for that old menu as a starting place for finding more about her Irish ancestors.

A couple of years ago, she was visiting Dublin with her husband. A huge snowstorm back home delayed their return. A trip to County Wicklow, an hour from Dublin was possible. Bray and Roundwood where Terence Griffin and Elizabeth Doyle had lived before sailing to American were a reasonable day trip.

Beautiful scenery emerged  traveling to Bray, a seaside town. Walking along the boardwalk, she imagined her great-great grandfather living there. Did he live on a farm? Did the family live by the sea?

After a pub lunch, the driver said he had some disappointing news. Roundwood, a high mountain, was frosted by snow and while he could drive to the top, it was too slippery to drive down.

Heading back in the car to Dublin, the drive apologized that they could not visit Elizabeth’s Doyle’s town.

As they rode along, a horizontal section of a frosty rainbow appeared on the left. A few miles further beyond a curve, a  mirror image of the rainbow appeared. A few minutes latter, the sun peaked through the gray sky and a full rainbow, bigger that she had ever seen, emerged from the top of Roundwood’s hilly mountain across to the Irish Sea. The frosty colors immediately gave her a sense that her ancestral faeries knew she was there. She could feel their presence. When she said that out loud, her husband was quiet. The driver said, “things like that happen in Ireland.”

Whenever she tells the tale, that same feeling prickles every hair. She has told her liminal experience of the trip to Bray and Roundwood many times and no one has doubted her meeting her ancestral faeries in the “thin place” which Ireland is known to be.